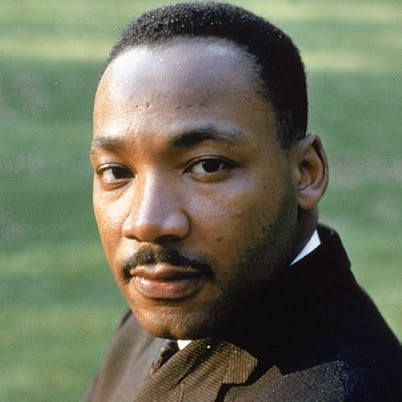 Today is Martin Luther King day and yes King is one of my heroes. King should be a hero to everyone, whether you are on the left or right. Many white people, especially those who lived when King was alive believe that he was just a troublemaker or an agitator. What I try to explain to these people, whenever I come across them, is that he was exactly the opposite of that. There were plenty of real troublemakers out there. H. Rap Brown and Stokely Carmichael, just to name a few who really were agitators and they literally wanted to burn this country down. They were competing with King for the hearts and minds of black people. King was preaching a strategy of change based on the philosophies of Jesus, Thoreau and Ghandi. I can testify to the fact that change was needed having grown up in the South. Black's lived like second class citizens. The irony is that there are real agitators out there today like Jesse Jackson, Al Sharpton, and many others that will not acknowledge the real changes that have occurred in society and just wont leave the race issue alone. If just given time any lingering issues would resolve on their own but they won't leave well enough alone because they have become filthy rich keeping the race issue alive. The term race merchant is very applicable to them. The race issue was never about money to King. He never made more than 10,000 dollars a year. This was a brilliant man who held a P.H.D. He could have just resigned himself to living a long and comfortable life as a preacher or teacher. Ten thousand dollars a year was a good living back then even for a white person. Yet he was a young husband and father who chose the path of matyrdom.

King was the face of the modern civil rights movement but there were hundreds of others both black and white that fought for the same cause but they never received the celebrity status of King. He once said that the day that the black man received his freedom the white man would receive theirs. This is so true. The South had always been controlled by a small group of white Democratic elitists who not only controlled the black man but the poor white man. The South in the 1960's was a poor and economically depressed area of the country that was not only suffering from the long term devastation of the Civil War but had been isolated by the rest of the country and the world by it's backward racial policies. It benefited the interests of this ruling class to keep both classes in their places. They did this by race baiting and playing on the fears and ignorance of the average white person. The Democrats controlled the South and this is how they earned votes. The same tactics that the Democratic Party uses today in order to keep power. The 1964 and 65 Civil Rights Acts broke this solid South up. We went from being an economically and socially depressed areas of the country to being one of the most progressive today. Northern and foreign business interests began moving into the South improving our economy and the lifestyles of both black and white. Martin Luther King played a big part but not the only part. As a Conservative I resent the fact that more schoolchildren today can tell you more about Martin Luther King than they can about Washington, Lincoln, and other American heroes, but I do include King on my list of heroes.