The Legacy Of Andrew Jackson And President Trump 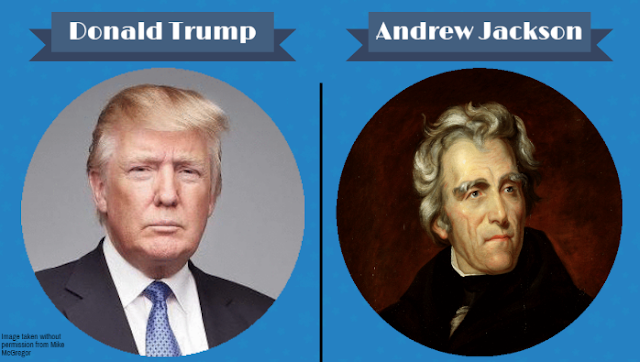 Many have compared Trump with Andrew Jackson. I can see some similarities. They were both populists and men of the people. However Trump can never hope to be the badass that Jackson was. Jackson was off the scales badass. Trump is not a racist like Jackson but Jackson was the product of his day. There are two areas in which I wish Trump would be more like Jackson. In regard to the issue of sanctuary cities for illegal immigrants and the abuse of power by Federal courts. In 1828 Congress passed a Tariff bill designed to protect Northern manufacturers. Since the South was primarily agricultural and a consumer region it had to import much of the items needed to survive. Such as farm equipment for example. A tariff is on foreign goods and this was called the Tariff of Abominations because the tax was so high. In 1832 congress passed a compromise tariff but the South complained that it was still too high. In 1798 Thomas Jefferson and James Madison argued in the Kentucky and Virginia Resolutions that the Federal government had no authority to exercise power not specifically delegated to it in the Constitution. In other words a state could nullify a Federal law that it disagreed with.  South Carolina nullified the tariff law in their state and threatened secession. Jackson was a strong believer in States Rights but believed in the ultimate supremacy of the Federal government. As a plantation owner and slave owner the tariff hurt him as well, However he was threatening to use military power in order to force South Carolina to comply with the law. John C. Calhoun had been Vice President under John Quincy Adams and Andrew Jackson. Calhoun resigned as Vice President because he opposed Jackson on the tariff issue. In 1833 Henry Clay worked out a compromise tariff that would bring about a 10% reduction each year for the next 8 years. The South agreed to this compromise but Jackson had the Force Bill passed in Congress the same day. This meant that he could use the military to force South Carolina to comply with the law if needed in the future. South Carolina would eventually secede in December 1860 which would ultimately lead to the Civil War. A friend asked Jackson if he had any regrets about his eight years in the White House. He answered  "That I didn’t shoot Henry Clay and I didn’t hang John C. Calhoun.” We are going through a modern day nullification crisis. Many cities in the United States have declared themselves to be sanctuary cities for illegal aliens in defiance of Federal immigration law. There are even states like California that are declaring themselves as sanctuary states. Trump should go even farther than cutting off Federal funding to these cities and states. In the spirit of Jackson he should send in Federal Marshall's to enforce the law. If that doesn't work he should threaten military force and use it if needed.

In 1830 Jackson helped push the Indian Removal Act through Congress. There was much opposition to this Act and rightly so. It only passed the House by one vote. David Crockett was a Congressman from Tennessee and opposed Jackson on this issue. Crockett had been a Jackson supporter but their friendship would eventually be severed over his opposition to Indian removal. Jackson would cause Crockett to lose his Congressional seat in 1836. Crockett would tell his constituents "You may go to hell and I will go to Texas". There he would heroically die at the Alamo. Many of these Indians, especially the Cherokee, had adopted the ways of the Whites. The so-called Five Civilized tribes of the Cherokee, Choctaw, Chickasaw, Creek and Seminoles were to be removed from the states of Florida, Georgia, Alabama and Mississippi. About a quarter of the Indians would die on the Trail of Tears. The Seminole were the only tribe to successfully resist being moved to Indian Territory in present day Oklahoma. They would hide out in the Everglades. The Indian Removal Act was a shameful episode in American history. The Cherokee fought it in Federal court and won in the Supreme Court. Chief Justice John Marshall declared the Indian Removal Act unconstitutional. Jackson reportedly said that Marshall has made his decision, now he can enforce it. The Federal courts are totally out of control and have been out of control for a long time. The abuse of power goes all the way back to Marshall's 1803 decision called Marbury Vs. Madison where the court usurped the power of judicial review which was not granted to it by the constitution. Because of this usurpation there have been a long string of atrocious court decisions like Dred Scott, Plessy Vs. Ferguson, Everson Vs. the Board of Education, Vitale vs Engel, Roe Vs. Wade and Lawrence Vs. Texas just to name a few. Now the Ninth Court of appeals has violated the Constitution twice in blocking Trumps executive orders aimed at a temporary ban on possible terrorist refugees coming into this country. I am not suggesting that Trump should ignore a court ruling, no matter how unconstitutional it might be in the way Jackson responded to Marshall's IRA ruling. However I think that Trump should make a major push in Congress toward impeaching these obstructionist judges for not following the Constitution. He should also begin a push in Congress to return the court to it's original role as a referee between the Congress and Executive on Constitutional issues and remove the power of judicial review. America has to find a way to reign in the courts or we are finished as a Democratic Republic.