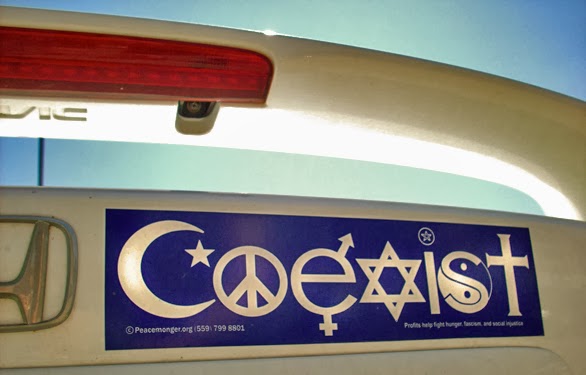 I am always a irritated when I see the bumper stickers on cars that say coexist or tolerance with each letter representing a different religion or ideology. Why is it that the left feels the need to preach to the rest of us on tolerance when America is the most tolerant nation on earth. In my view we tolerate things that shouldn't be tolerated. I would challenge the people who have these stickers to take a drive through countries like Saudi- Arabia, Pakistan, Iran, China, and North Korea and give us a report on how tolerant they are. The left worries about offending Muslims when Christians are being persecuted and killed by the thousands, not only at the hands of Muslims but Communists. The left defends Islam when the goal of most Muslim countries is the same goal as Hitler. The destruction of the Jewish race. The thing that has always set America apart from most countries of the world is that it has had a national conscience. Like a person that struggles with their conscience over who will have mastery of their soul America has had that same struggle. Lincoln said that every man is like the moon, they all have a dark side. At our founding we said that all men are created equal while at the same time upholding the institution of slavery, suppressing economic classes, and the persecution of the American Indian. We fought a war that killed almost 800,000 men or 2% of the American population. The results of that war was not the end of racism but the beginning of the end. It would take another 100 years to began leveling the playing field. We have made great strides in ending racism, ethnic bigotry, religious bigotry and the list goes on. Now we are faced with an insidious bigotry called Political Correctness. Christians, and Conservative groups are the target of this bigotry. Difference of opinion no longer falls under the heading of honest debate, it is now tagged as hate speech. Historically it has been the Democrats that supported slavery, segregation, hatred and bigotry. The only ones that are intolerant in this country are leftists.