SIT DOWN AND SHUT UP 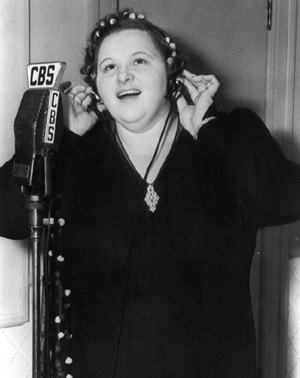 I grew up listening to Kate Smith singing God Bless America but until the recent controversy involving her supposed racist songs of the 1930's I knew very little about her. As far as I knew God Bless America was the only song that she ever sang. Little did I know that she had a string of hits. Smith was born in Greenville Virginia on May 1, 1909 and died June 17, 1986 in Raleigh North Carolina. She had a weight problem for most of her life and in spite of her powerful singing voice she had to endure many insults regarding her weight. Kate Smith never married. She was 5' 10" tall and weighed roughly 235 pounds. In public she seemed to handle the criticism well but would sometimes be seen weeping in her dressing room. She sang her big hit God Bless America for the first time on November 10, 1938 for Armistice Day. Kate was a star of radio and later television. During WW2 she raised over 600 million dollars in War Bond pledges. In 2018 dollars this amounts to 10.2 billion dollars. She raised 110 million dollars in one 18 hour marathon. When president Roosevelt introduced her to the King and Queen of England he said Kate Smith is America.

When I first heard that the Yankee's and the Philadelphia Flyers were suspending the playing of God Bless America during games, and Philadelphia was removing her statue, something told me not to rush to judgement. I have seen the left screw up enough not to trust them on things like this. This led me to look for the real story. I will admit that when I first read the lyrics to the two songs she sang, That's Why Darkies Were Born and Pickaninny Heaven I cringed at the stereotypical view of Black people. These songs were sung in the early 1930's. You have to factor in the systemic racism of that period but I continued to feel that there was more to the story. I found out that Kate co-wrote That's Why Darkies Were Born with Paul Robeson, a Black actor, singer and civil rights activist. So why would she co-write a racist song with a Black man who was fighting for civil rights. The answer came this morning while listening to Glenn Beck. Smith was using this song to mock White supremacy. As of yet I have not discovered her intent regarding the song Pickaninny Heaven sung in the movie Hello Everybody but I have to believe that if her intent was to mock White supremacy in one song she is doing the same in the other. This is much like Mel Brooks Movie Blazing Saddles. This movie was made in 1974 and a satirical look at racism in America. Because of political correctness I don't believe that Blazing Saddles could even be made today. This whole controversy was started by one email by a Yankee fan referring to the perceived racism in these two songs. The cowardly owners of the Yankees and Philadelphia Flyers besmirched the reputation of this great lady overnight by their knee jerk reactions. At least the Yankee's left open the possibility that they could return to the playing of God Bless America that became a tradition after September 11, 2001. They said that they were suspending the playing of “God Bless America” while they “carefully review this situation.” One email caused this. It is time for the good people of America to tell these people who want to destroy our past to shut up and sit down.

THAT'S WHY DARKIES WERE BORN

Someone had to pick the cotton,

Someone had to pick the corn,

Someone had to slave and be able to sing,

That's why darkies were born;

Someone had to laugh at trouble,

Though he was tired and worn,

Had to be contented with any old thing,

That's why darkies were born;

Sing, sing, sing when you're weary and

Sing when you're blue,

Sing, sing, that's what you taught

All the white folks to do;

Someone had to fight the Devil,

Someone had to stoke the train

That would bring God's children to green pastures,

That's why darkies were born.

Haven't you been told of the place where the good little pickaninnies go?
I've just been there so I ought to know
Great big watermelons roll around and get in your way
In the pickaninny heaven

She sings to the orphans, “…though the good lord took your mammy, she’ll be waiting there for ya.”