Most everyone has heard of the of the notorious outlaws Jesse and Frank James. But did you know that they lived in Nashville from 1875 until March 1881? Jesse's oldest son Jesse James Jr. was born in Nashville along with his sister Mary. Jesse Jr. was born at 606 Boscobel Street on August 31, 1875. Mary was born on West Hamilton Road in Bordeaux on July 17, 1879. Jesse Jr. went by the name Tim and as far as he knew his last name was Howard. He and his sister would not know their real last names until after Jesse was killed in 1882. Jesse and his wife Zerelda would also lose two male twins in infancy.  Jesse's brother Frank lived on Clarksville Pike. While living there he and his wife Annie Ralston James gave birth to a son named Robert Franklin on February 6, 1877. For a time he would be dressed as a girl and go by the name of Mary. Why his parents did this I do not know.  The brothers were on the run. Nashville was a large town and they could blend in to the local population passing themselves off as respectable citizens. They had led violent lives until they moved to Nashville. Both had been guerrilla's in the Civil War riding with Quantrill and "Bloody Bill Anderson". Their men raped women, shot down surrendered soldiers, Unionist civilian's, and sometimes scalped their victims. Jesse was nearly killed on two occasions. Both times he was shot in the chest. The last time near the end of the war when he was trying to surrender. His first cousin Zerelda "Zee" Mims nursed him back to health. Nine years later she became his wife.

After the war in 1866 the James gang started robbing banks, stagecoaches, and trains. This was their most active period until September 7, 1876 when the James-Younger gang rode into Northfield Minnesota to rob a bank. The gang was ambushed by enraged citizens who realized what they were up to after riding into town. Being from Missouri they stood out like a sore thumb. During the robbery Jesse blew a bank tellers brains out and an innocent bystander was killed. The gang barely escaped. Two gang members were killed and the Younger's were were later captured. Jesse and Frank managed to get away and were the only two that were neither hurt or captured. Eventually they made their way to Nashville. Here they created the facade of respectable citizens. They sent for their families and Jesse went by the alias of John Davis or (David) Howard. Frank went by the name Ben J. Woodson. Jesse lived in at least three places in Edgefield, which is in East Nashville. At 606 Boscobel street, 903 Woodland Street and lived the longest at 711 Fatherland St. The Fatherland Street house still stands and is on the National Register of Historic places. Both of the houses on Boscobel street and Woodland Street have been razed. The Fatherland Street house was in deplorable condition and scheduled for demolition in 1984 but was restored by a private owner. It was originally built in the mid 1850's. 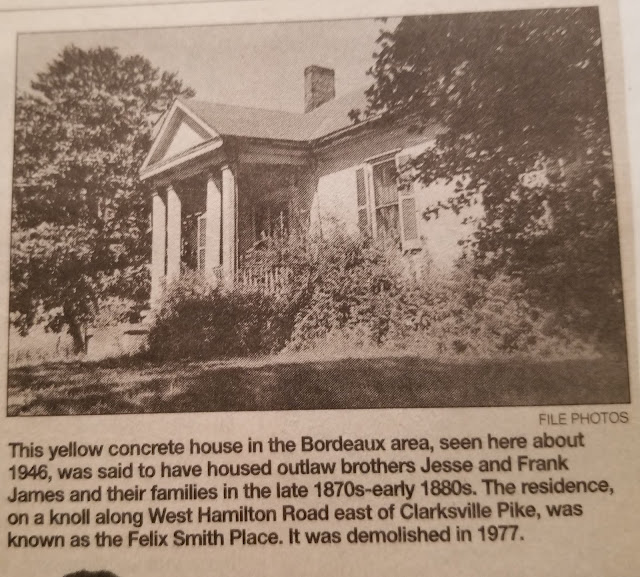 My wife Debbie grew up at 915 Boscobel St. until we married in 1968. Her father lived there until 1989. My wife's house is in walking distance of the James house on Fatherland Street. Edgefield was the Belle Meade of the Jesse James era and as a young man I didn't not realize the historical significance of the neighborhood. I have a picture on our wall of her house in 1906. Frank seemed ready to settle down in Nashville but about 1879 Jesse became restless. The gang started robbing again and in 1881 the brothers returned to Missouri. Jesse's downfall began in Nashville on March 25, 1881 when a James gang member Bill Ryan, using the alias Tom Hill, stopped by the grocery store of W.L. Earthman in Whites Creek. This building still stands and when I dated my wife in the 1960's we would frequently pass this building which at that time had a historical marker nearby.  Mr. Earthman also had a saloon in the back of the building. Ryan tended to shoot his mouth off when he was drinking and he began bragging about his exploits with the James gang. Earthman took him at his word and he and others overpowered Ryan. They took him to Nashville where he was arrested. After receiving word of his arrest Jesse and Frank left town in a hurry the next day. Jesse went back to his home in St. Joseph Missouri. On April 3, 1882 a member of Jesse's gang named Bob Ford, and his brother, schemed with the governor of Missouri, Thomas Crittenden. The governor led the left wing of General Rosecrans Army at the battle of Stones River. Ford agreed to kill Jesse and collect the bounty on his head. From that point on Ford was known as the" dirty little coward that shot Mr. Howard". A few years later he was shot in the throat at point blank range by a man wielding a shotgun. Jesse James was seen by many of the common people as a "Robin Hood". Yet there is no evidence that he ever shared his money with anyone other than himself and fellow gang members. Jesse was nothing but a cold blooded killer in my opinion. Mary James Barr, who really didn't know her father, came to Nashville in 1933 for the express purpose of seeing the house that she was born in on West Hamilton Road. The house was torn down in 1977. Mary was asked to talk about Jesse and Frank by a local newspaper reporter. She said that the brothers never unsaddled their horses and always slept near a window in order to make a quick getaway. Mary would die two years later in 1935. The following is the last picture ever taken of Jesse when he worked at a cedar barrel factory in Nashville. Jesse is sitting in the center of the picture on the front row. Another gang member has his arm around his shoulder. Frank is to the right on the back row. There are five gang members in the picture besides the James brothers.