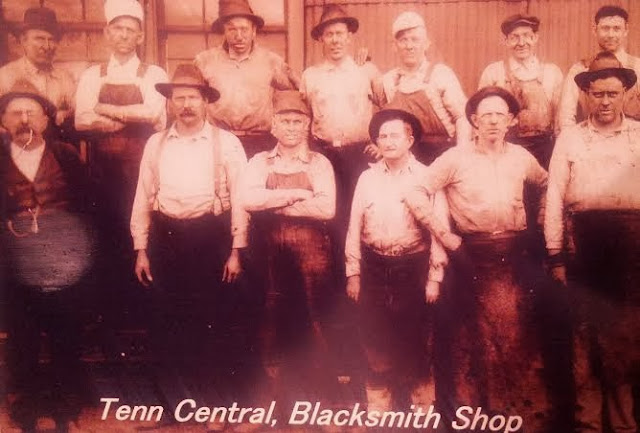 My jaw dropped to the floor. I picked out my great grandfather, John Clayton Breckinridge Frogge, who was the shop foreman and the first man in the front row. He was born July 19, 1858 and would die on January 20, 1943. This was after suffering a massive heart attack at work. My Uncle Elby Morse was the 2nd man from the left on the top row. He was an Uncle by marriage because he was married to my grandmother's sister "Lizzie" Frogge Morse. The 4th man from the left on the back row was my grandfather Marcellus Fain Brown born on June 16, 1889 and died in July 1968. I can't remember the man's name who gave me this picture but his grandfather is the 3rd man on the 1st row and his uncle was was the last man on the right in the 2nd row. His uncle died in a car wreck in 1939 which means this picture was probably made in the 1920's or 1930's. What are the odds of two men meeting casually in a restaurant and out of an old picture of thirteen men the two of us could identify five of them?