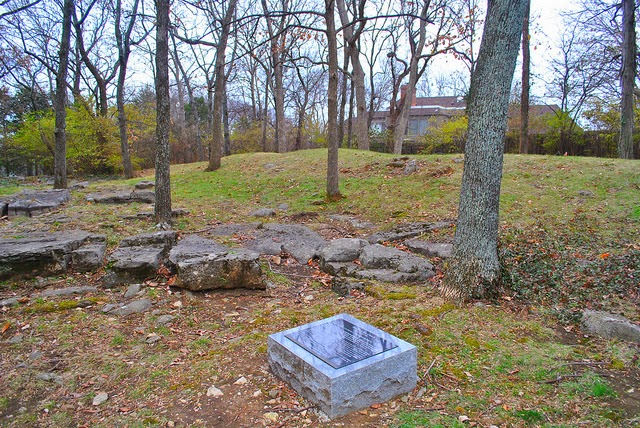 By the early afternoon of December 15, 1864 Wilson's Union cavalry along with infantry was heading toward the Confederate redoubts and troops in line of battle behind a stone wall along the eastern side of Hillsboro road. A redoubt is defined as a complete enclosure of any form used to defend a prominent point. These redoubts were manned by artillery batteries and Confederate infantry. By late morning Union troops reached Redoubt # 5 that sat on a high hill on the west side of Hillsboro road near Harding Place. There are now condominiums there and the redoubt has been destroyed. It was attacked by cavalrymen armed with seven shot Spencers and Union infantrymen. It was also pounded by Union artillery for an hour. However this redoubt was the first to fall. By this time Redoubt# 4 became the focus of the attack but it was a tougher nut to crack. There were 148 men manning Redoubt # 4. Forty eight artillerymen manning four 12 pounder Napoleon smoothbore cannon and 100 infantry facing 4000 Union troops. As fleeing Rebel infantry ran past Redoubt #4 the commander Captain Charles Lumsden pleaded for them to stop and help him defend the redoubt. One Rebel shouted "There's a whole army on your front" Union General John MacArthur set up three batteries of rifled cannon numbering 24 guns on a hill 1800 yards to the west and pounded Redoubt #4 for an hour. All four Confederate guns continued firing in response. Redoubt #4 is near present day Hobb's road near Hillsboro road in Green Hill's. It was a challenge to hunt for Civil War relics around Nashville because much of the battlefield has been developed. In the 1970's I found Redoubt #4 and it is on private property but I managed to find mostly fragments from Union Hotchkiss shells and the lead bands that wrapped around the middle of the shell, spherical case and Schenkel shells. Spherical case was a round cannonball, with a hollowed out chamber surrounded by a thin iron shell packed with gunpowder and lead or iron balls. This shell was invented by a British Officer named Lt. Henry Shrapnel. This area was plastered by the Union batteries because I found a large amount of shrapnel here.


The Battle of Nashville probably had the largest civilian audience of any battle of the war. People lined the hills in rear areas around Nashville. Especially on Capital Hill and College Hill near 2nd Ave. Most Nashvillians sympathized with the Rebels but they watched with a deathly silence trying not to betray their emotions, due to their living in an occupied city. Nashvillians had had it rough over the last three years. They were virtually prisoners in their own city. In order to travel outside the city they had to acquire a military pass which were denied without a good reason. If you were allowed to travel outside the city without military protection you were subject to harm by bandits or guerrilla partisans. If you were known to have Southern sympathies or you had the courage to speak out you were probably going to spend time in the local State prison or a Northern prison. You could not conduct business or hold a job unless you swore a loyalty oath to the Union. Loyal Confederate citizens had prayed for liberation for the last three years and many of the ragged Confederate troops in the Army of Tennessee were the sons and husbands of these civilians but they had no illusions about their chances for victory. Finally after a a fight of three hours the Union troops surrounded Redoubt #4. The guns of Redoubt #5 were firing on Redoubt #4. A shell took off the head of a gunner next to Lumsden, splattering brains and blood all over his face and beard. Then the gunner with the primers took off running in a panic, making Lumsden's guns useless. The Captain gave the order to retreat.


After Redoubt # 4 fell, Redoubt # 3 became the focus of the Union Army. Redoubt #3 fell and the guns of Redoubt #2 were trained on the Union attack coming from the direction of #3. Union Colonel Sylvester Hill was shot from his horse by a Confederate sharpshooter from 300 yards away, while leading the attack. He would be the highest ranking Officer killed in the Battle of Nashville. Redoubt # 3 was behind Calvary Methodist Church to the west of Hillsboro road and a very small remnant can still be seen behind the church. Redoubt # 2 was at the corner of Woodmont Blvd. and Hillsboro road. For many years there was a wooded lot there and a large house sat beyond the wooded lot. Remnants of the redoubt could be seen but most of it was destroyed when the house was built. I found many relics in that lot over the years until contractors totally cleared the woods and destroyed the redoubt in order to build a condominium. So much for progress. The Yankee's took Redoub # 2 just before Redoubt # 1 fell. Redoubt # 1 was taken by Union troops coming from the Union lines near present day Vanderbilt University attacking from north to south catching the Rebels in a pincers. Redoubt # 1 is probably the best preserved of all the redoubts and has been made into a small park. It is probably a couple hundred yards from Redoubt # 2 next to Benham road just to the north of Woodmont Blvd., near the Boy Scout Headquarters.


Redoubt numbers 1, 3, and 4 are the only redoubts still in existence and 1 and 4 are the best preserved. It makes no sense to me why so many communities neglect their history. To me the cities that protect their history are the ones that are the most colorful and interesting. History also brings in money for a community in tourism dollars. I love cities like Charleston, Savannah, St. Augustine, Gettysburg, and Harper's Ferry that have preserved so much of their history. After the fall of the redoubts Hood was forced to retreat to a more compact and stronger line, for the amount of troops that he had,during the night of December 15, 1864. This line would stretch from Compton's Hill, which would later be renamed Shy's Hill after Lt. Col William Shy all the way to Peach Orchard Hill which is now at the intersection of Battery Lane and Franklin road. Shy's Hill sits south of Battery Lane fairly near the intersection of Battery Lane and Hillsboro road. This new line would stretch about two miles. 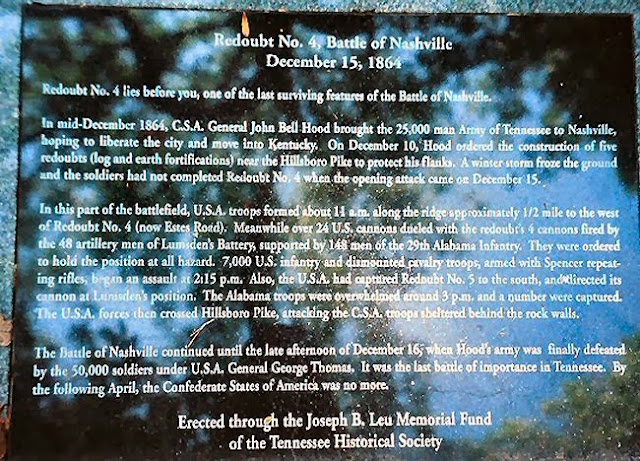