The Battle Of Nashville Monument


Inscription On The Battle Of Nashville Monument
"Oh, Valorous Gray, In The Grave Of Your Fate,
Oh, Glorious Blue, In The Long Dead Years,
You Were Sown In Sorrow And Harrowed In Hate,
But Your Harvest Today Is A Nations Tears.
For The Message You Left Through The Land Has Sped
From The Lips Of God To The Heart Of Man:
Let The Past Be Past : Let The Dead Be Dead. --
Now And Forever American!"

On Veterans Day 1927 the Peace Monument was dedicated honoring all veterans North and South who fought in the Battle of Nashville. There were Civil War and World War I veterans at the ceremony. The statue originally cost 30,000 dollars which was a large sum in those days. The obelisk was crafted from Italian marble and the bronze portion of the statue was cast from melted cannons. An Italian sculptor Signor Moretti was hired to design the statue. He later claimed that of all the work that he had done he was proudest of the Peace Monument. The original monument was located in a very prominent location at the intersection of Franklin road and Thompson Lane right where the Confederate battle lines ran through on the first day of the battle of Nashville, December 15, 1864. As a child I always looked forward to seeing the monument whenever we traveled out Franklin road. This is how I came to learn that we even had a battle in Nashville. I remember a story being told about my Uncle Jim Hall who was a back-up singer and musician. He sang and played for all the great country music singers during the 1950's and 60's. Uncle Jim also arranged the music on many hits. He had a platinum album for Sue Thompson's "Sad Movies Make Me Cry" and a gold album for "Crying" by Roy Orbison. Uncle Jim, like many in the music industry, had a drinking problem. He broke his leg trying to climb the Peace Monument.
In March of 1973 I went to work for Colonial Baking Co. on Franklin road. A year later on March 31, 1974 a tornado hit Nashville. The tornado cut a path along Woodmont Blvd. after slamming into the monument. From there it skipped over and hit 100 Oaks Mall, blowing out plate glass windows and traveling straight down Thompson Lane. It leveled many trees and buildings. I worked second shift and my heart sank as I drove by the monument on my way home. The monument was destroyed. The only thing that was salvageable was the bronze portion of the statue. This was a young man holding back two charging horses that represented the North and South. Three days later, April 3, 1974, two more tornado's hit Nashville in what would come to be known as the "day of the killer tornado's". Until April 2011 this was the worst outbreak in recorded history. There were 148 tornado's confirmed in 13 states. Over 300 people were killed. They would eventually restore the bronze part of the statue minus the marble obelisk. When the interstate was constructed they placed the statue in a small plot of land that was difficult to access and out of sight from the public. In the 1980's concerned citizens began looking for a new site for the monument. In 1998, after many years of legal roadblocks, the money was raised and the monument was placed in a park on Granny White Pike and Battlefield Drive after a re-dedication ceremony. The monument was restored to it's former glory including a new obelisk topped off with an angel as in the original statue. 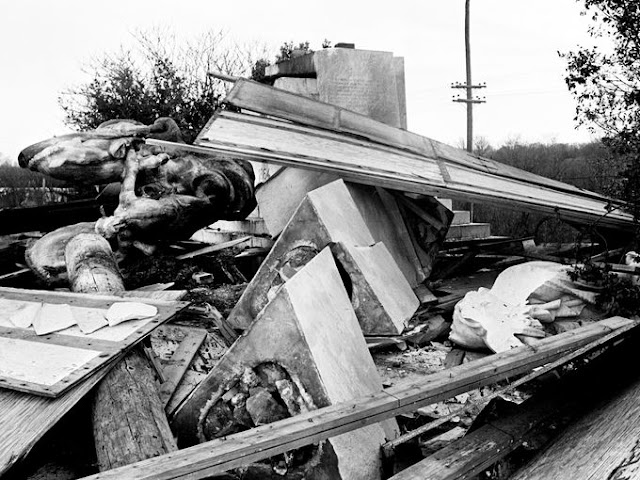 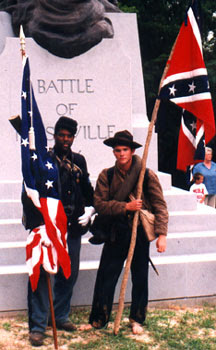