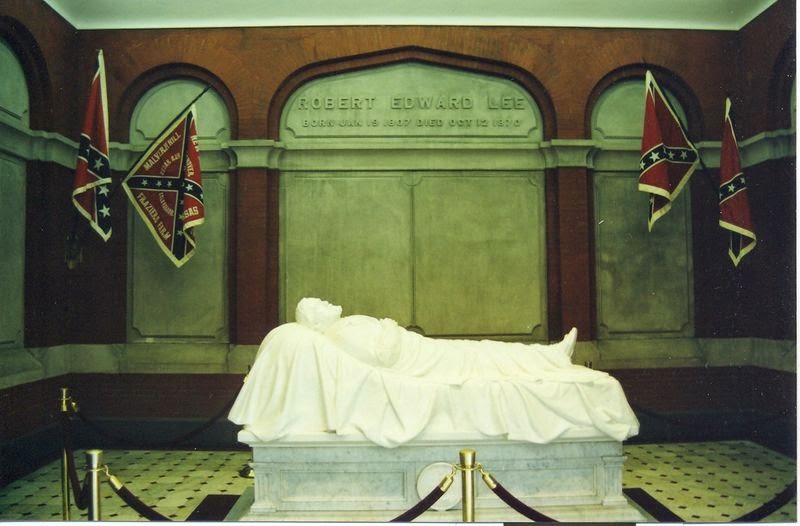 There are times that my head literally wants to explode over something that the PC crowd does and this is one of those times. I learned recently that a small group of black students called "The Committee" at Washington and Lee University had complained about the Confederate battle flags surrounding Robert E. Lee's tomb. On July 9, of this year the university president, a wimp in my view, succumbed to the pressure and removed the flags. Ironically Lee might agree with the decision to remove the flags but not for the reasons put forth by these narrow minded and shortsighted students. Lee's fame as a general and a man of high character insured many lucrative job offers from both Southern and Northern sources. However he was offered the job of president of what was then Washington University. It was named after Washington when he endowed the university with a 20,000 dollar grant in James River Canal stock in 1796. Lee accepted the job for three reasons. He had been superintendent of West Point before the war and he felt that he was more than qualified for the position. Second, the Washington family was his in-laws because Lee's wife was the great-granddaughter of Martha Washington and Lee always admired George Washington as a heroic figure and a role model. The third and most important reason for him taking the job was that he felt it was the best position for teaching reconciliation of the nation. He encouraged students to enroll from the North and South. Lee transformed the university from a small not so well known school that specialized in Latin to a progressive institution of higher learning. He added a journalism school, a law school and a business school. Lee also introduced an honor system that exists to this day.

The general died on October 12, 1870, five years after the Civil War. Almost immediately after Lee's death the school name was changed to Washington and Lee University. I have had the honor of visiting the University and Lee's tomb. All of Lee's children, his wife and father "Lighthorse" Harry Lee are buried in crypts below him. His horse Traveler is buried just outside the door of the chapel. Robert E. Lee aggressively fought a war against the United States of America in order to establish a separate and independent country called the Confederate States of America and is considered one of the greatest military leaders in American history. However no man worked harder to bring about reconciliation and because the Southern people considered Lee to be second only to God himself they followed the example of Lee in bringing about reconciliation. The greatest fear of Abraham Lincoln toward the end of the war was that Southern leaders would not surrender but organize guerrilla bands and prolong the war indefinitely. There were six leaders that avoided such a terrible outcome on both the Union and Southern side. Abraham Lincoln, Ulysses S. Grant, William Tecumseh Sherman, Robert E. Lee, Joseph E. Johnston, and Nathan Bedford Forrest. Lee, Johnston, and Forrest were the most respected military leaders in the South at the end of the war and the Southern people would follow wherever they chose to lead. All three chose the manly road to peace and reconciliation, thereby helping to save the union. Lincoln, Grant and Sherman were instrumental in saving the union by granting terms to the defeated Southern soldiers that allowed them to surrender with dignity and honor worthy of their sacrifice fighting for a lost cause. Lee formally requested that his American citizenship be restored before he died but it was not granted until President Ford signed the Bill restoring his citizenship on August 5, 1975. The following speech was given by President Ford at a ceremony at the Custis-Lee mansion in Arlington Cemetery.

Lee's dedication to his native State of Virginia charted his course for the bitter Civil War years, causing him to reluctantly resign from a distinguished career in the United States Army and to serve as General of the Army of Northern Virginia. He, thus, forfeited his rights to U.S. citizenship. Once the war was over, he firmly felt the wounds of the North and South must be bound up. He sought to show by example that the citizens of the South must dedicate their efforts to rebuilding that region of the country as a strong and vital part of the American Union. In 1865, Robert E. Lee wrote to a former Confederate soldier concerning his signing the Oath of Allegiance, and I quote: "This war, being at an end, the Southern States having laid down their arms, and the questions at issue between them and the Northern States having been decided, I believe it to be the duty of everyone to unite in the restoration of the country and the reestablishment of peace and harmony.... As a soldier, General Lee left his mark on military strategy. As a man, he stood as the symbol of valor and of duty. As an educator, he appealed to reason and learning to achieve understanding and to build a stronger nation. The course he chose after the war became a symbol to all those who had marched with him in the bitter years towards Appomattox. General Lee's character has been an example to succeeding generations, making the restoration of his citizenship an event in which every American can take pride.It is possible that Lee would agree with taking down the Confederate battle flags but not because he would consider them racist, after all he was a product of his environment and time, He led thousands of men into battle to bleed and die under the Confederate banner. Lee's flag of choice would be the American flag.