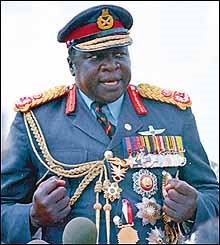 I posted this picture of Obama as a college student smoking weed in his dorm room. My wife's cousin asked me who the guy in the picture hanging on the wall was. Until she asked that question I hadn't really thought about it. One look and I realized that it was Idi Amin. He was a brutal dictator of Uganda from 1971 until 1979 and it is estimated that he was responsible for the deaths of at least 300,000 people. Amin was also in power during the famous Entebbe raid. The following is from Wikipedia. Someone has suggested to me that this photo has been photo shopped. Even if it is Obama has admitted to the fact that he was a heavy smoker of marijuana. Based on his support of modern day radical Islam I have no doubt that he was probably a supporter of Idi Amin.

In June 1976, Amin allowed an Air France airliner from Tel Aviv to Paris hijacked by two members of the Popular Front for the Liberation of Palestine – External Operations (PFLP-EO) and two members of the German Revolutionäre Zellen to land at Entebbe Airport. There the hijackers were joined by three more. Soon after, 156 non-Jewish hostages who did not hold Israeli passports were released and flown to safety, while 83 Jews and Israeli citizens, as well as 20 others who refused to abandon them (among whom were the captain and crew of the hijacked Air France jet), continued to be held hostage. In the subsequent Israeli rescue operation, codenamed Operation Thunderbolt (popularly known as Operation Entebbe), on the night of 3–4 July 1976, a group of Israeli commandos were flown in from Israel and seized control of Entebbe Airport, freeing nearly all the hostages. Three hostages died during the operation and 10 were wounded; 7 hijackers, about 45 Ugandan soldiers, and 1 Israeli soldier, Yoni Netanyahu, were killed. A fourth hostage, 75-year-old Dora Bloch, an elderly Jewish Englishwoman who had been taken to Mulago Hospital in Kampala before the rescue operation, was subsequently murdered in reprisal.

Netanyahu was the brother of the present Israeli prime minister and the movie Last King of Scotland was about Amin. This picture sheds even more light on Obama's anti- Israel attitude and his sympathy with radical Islam. Along with his own radicalism. I continue to be amazed at the apathy, and ignorance of so many of the American people that elected this deviant and miscreant to office. Not once, but twice. On top of that we have the Democratic state run media that absolutely failed to vet him and did everything that they could to get him elected. If there was picture after picture of a Republican presidential candidate, sitting around getting high, and in one of them a picture of Adolph Hitler was hanging on the wall, how long do you think it would take for the press to expose them? The press would be on them like a duck on a June bug. Yes people, elections have consequences, and I am not sure we can survive a mistake of this magnitude.