War Is A Terrible Thing 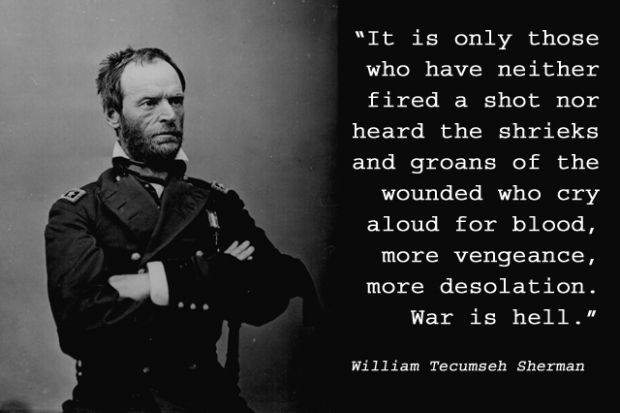 Before the Civil War William Tecumseh Sherman was the president of a small military academy in Louisiana. That school would eventually become Louisiana State University or LSU. His goal was to model it after West Point and the Virginia Military Institute or VMI. The name Sherman would become hated in the South and in some circles today it is still met with loathing. Ironically Sherman loved the South and the Southern people, before, during and after the Civil War. He would donate two captured Confederate cannon to the school after the war that are still at LSU today. Understandably there are no buildings or landmarks named after him on campus. His philosophy of war reflected the realism of a great military leader. Once the war began he intended to prosecute it in a manner that would bring about the quickest resolution. He once said "War is cruelty. There is no use trying to reform it. The crueler it is, the sooner it will be over". It was said that Grant broke the backbone of the South but Sherman broke it's heart. He said the following words to a Southern friend with tears streaming down his cheeks upon his resignation as superintendent of the Louisiana Military Academy. You people of the South don’t know what you are doing. This country will be drenched in blood, and God only knows how it will end. It is all folly, madness, a crime against civilization! You people speak so lightly of war; you don’t know what you’re talking about. War is a terrible thing!