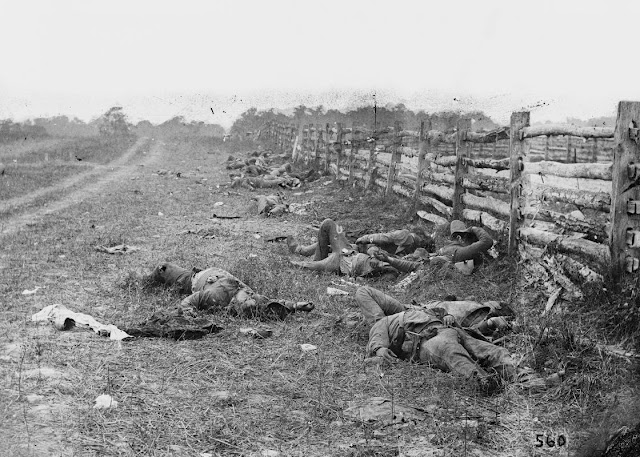 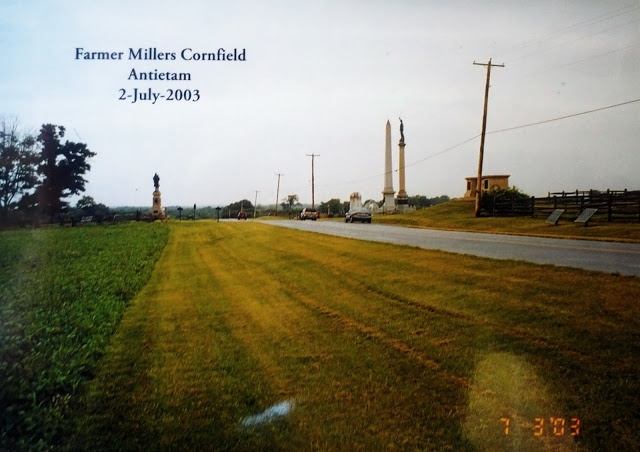 The Battle of Antietam was the bloodiest single day in American history. Robert E. Lee raided Maryland after his costly victory during the Seven Days Battles and his masterful victory at Second Bull Run. He had divided his Army of forty thousand men into five parts. Any General more aggressive than George McClellan might have defeated Lee in detail but McClellan was far too cautious. In a twist of fate that could easily be attributed to God a Union Sergeant found a set of Lee's battle plans in an envelope with three cigars. Lee realizing just in time what had happened concentrated his men with his back to the Potomac along Antietam Creek near Sharpsburg Maryland. This revealed the tenacity of Lee and adherence to the Chinese master of war Sun Tzu who said that men fight harder when there is no escape. McClellan had nearly 100,000 men as opposed to Lee's 40,000. Had he attacked all along Lee's lines simultaneously and maintained a constant pressure on all points there is no way that Lee's lines could have held. McClellan, however; played right into Lee's hands and attacked his left in the East Woods and Farmer Millers cornfield. This allowed Lee to shift troops from other parts of his line to the endangered left flank.

Fighting battles this way extended the life of the Confederacy. Not until Ulysses S. Grant took over as overall Union commander in March 1864 would anyone on the Northern side, perhaps with the exception of Lincoln, realize that pressure had to be applied evenly against the numerically inferior Confederate Army. The way to beat them was to deny them the ability to re-enforce threatened points along their lines. Grant would apply this principle in a grand strategy that would encompass both the Eastern and Western theaters simultaneously. These piecemeal attacks at Antietam failed. After the failure of the East Wood attack the fighting spilled over into the West Wood and the area near Dunker Church. When I toured Antietam in 2003 I took this picture from nearly the same angle as the Civil War photographer. The bullets were so thick in Farmer Millers cornfield that the cornstalks were cut completely down. 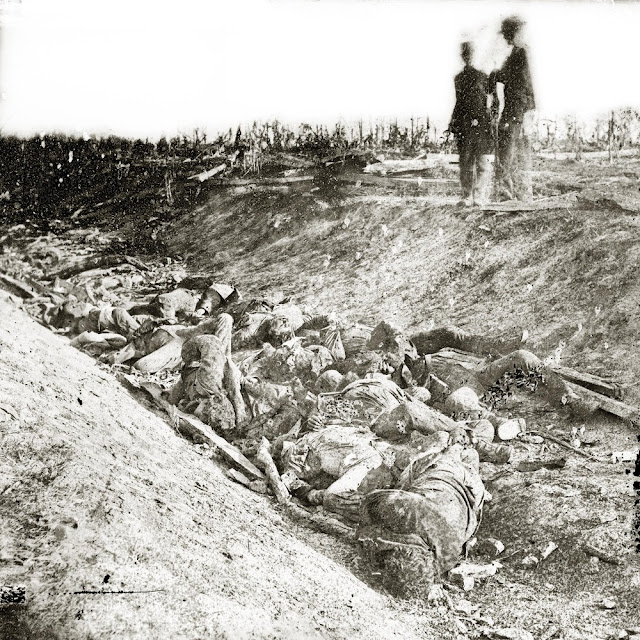 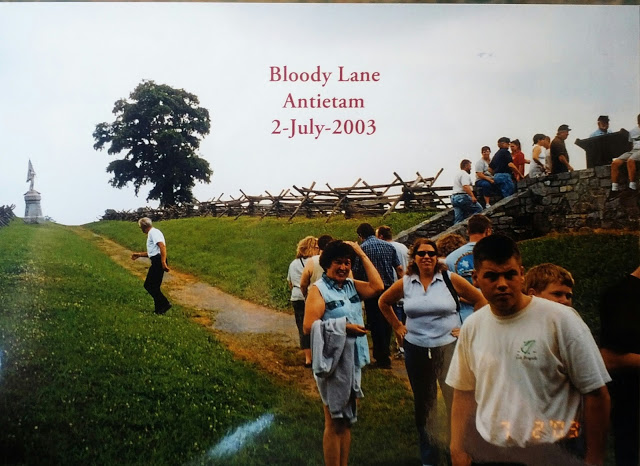 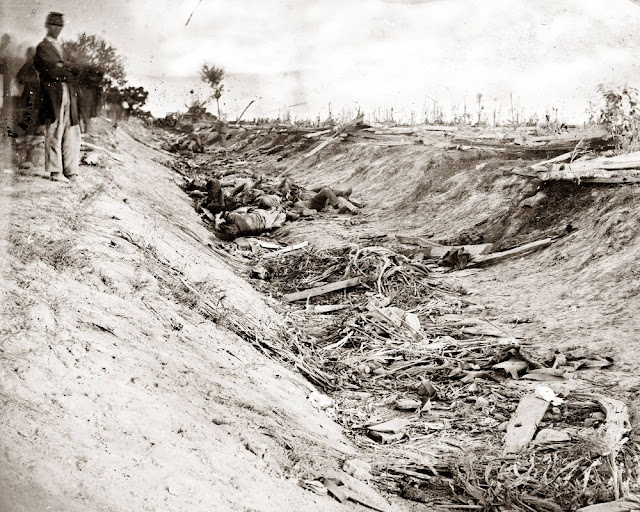 As the fighting raged in the West Woods around the Dunker Church at Antietam Confederate General Daniel Harvey Hill had his 2,600 men stack fence rails and prepare for the coming Union attack along the "Sunken Road" as locals called this old farm road before the war. It had been worn down by wagon wheels and rain over the years but became a natural defensive position on September 17, 1862. At 9:30 AM Union General William French attacked the Sunken Road with 5,500 men. From 9:30 AM to 1:00 PM the Confederates successfully held off Union attacks but were eventually overwhelmed by sheer force of numbers. The Confederates had no reserves and it was only Union confusion and exhaustion that saved the Confederates from defeat. Confederate General John B. Gordon was shot five times. One bullet smashing the side of his face. He fell in the road with his face buried in his hat. He would have drowned in his own blood but for a bullet hole in his hat that allowed his blood to drain out on the ground. Both Union and Confederates lost 5,500 casualties in killed and wounded. The Sunken Road was forever known from that day forward as the "Bloody Lane". 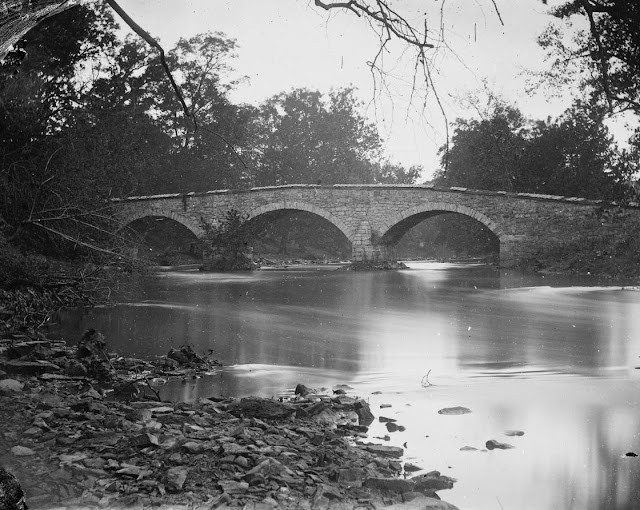 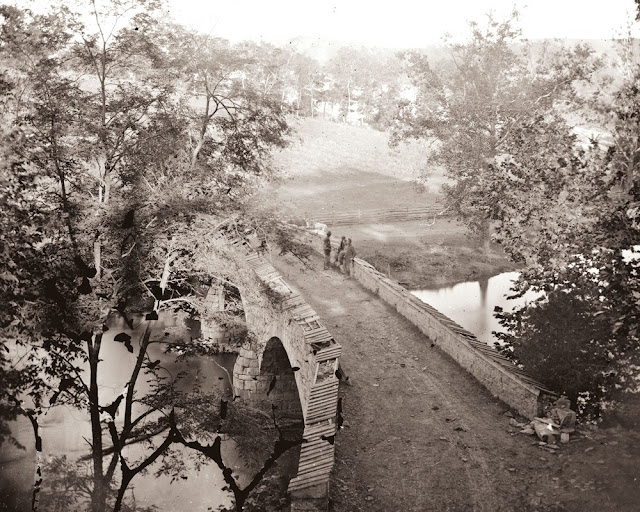 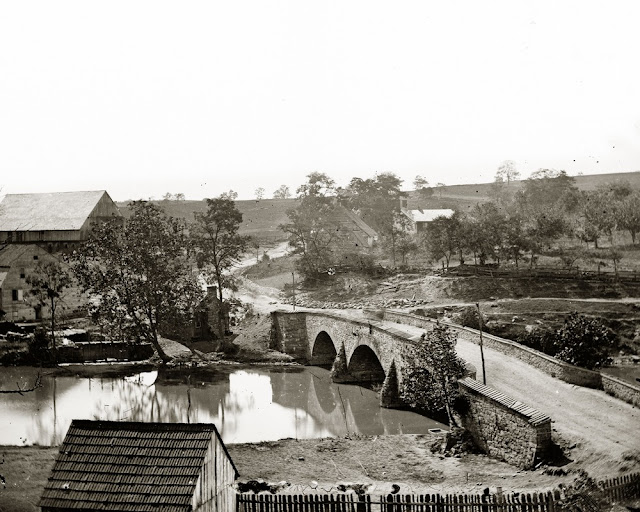 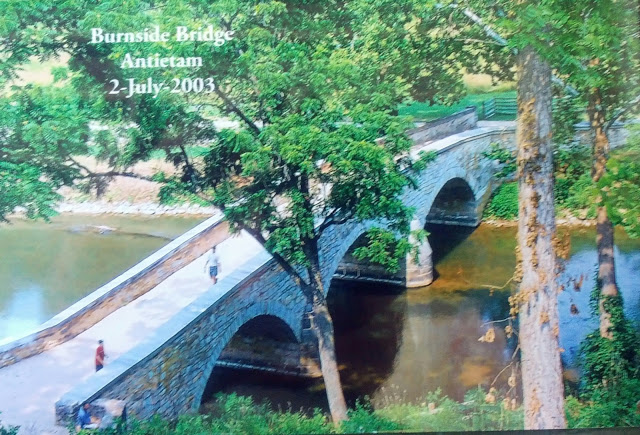 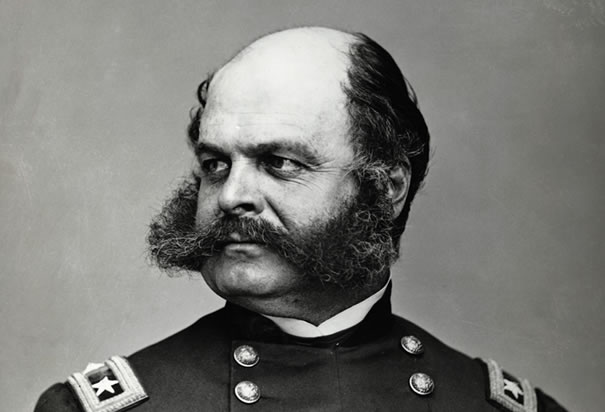 Lee had continually shifted men from his right to re-enforce his left at Antietam until there were only 500 confederates facing General Ambrose Burnside's entire IX Corps. Burnside as it turned out was one of the North's worse Generals. However he was an inventor of the Burnside rifle and his side whiskers became known as Burnside's which at some point in time was turned into the term sideburns. The reason 500 Confederates could hold off a whole Union Corps is because they defended the high boulder strewn bluff on the west bank of Antietam Creek. The Yankee's were trying to cross the narrow stone structure called the Rohrbach Bridge under heavy fire. Antietam Creek was not fordable at that point and Burnside could have forded it about a half mile downstream but he wasted three hours and at least that many attacks trying to cross over on the bridge. Lee shifted several artillery batteries to fight Burnside but Burnside was finally able to establish a bridgehead on the west bank. There was nothing standing between him and the Confederate rear but he wasted another two hours getting all of his men across and forming his attack.

Confederate General A.P. Hill forced marched his three thousand man Division the seventeen miles from Harper's Ferry just in time to meet Burnside's attack at 2:30 in the afternoon. Burnside was so rattled he retreated back to the west bank of Antietam Creek and remained there for the rest of the day. This was the end of the Battle of Antietam. There had been 13,000 Union Casualties and 10,000 Confederate. More Americans died in one day at Antietam than any other battle in history. Lee remained where he was the next day waiting for an attack that never came. That night he began recrossing the Potomac back into Virginia. Although Antietam had been a tactical draw it was a strategic victory for the Union because it ended Lee's invasion of the North. It was also the turning point of the war because Lincoln was able to issue his Emancipation Proclamation that changed the war from not just a fight to preserve the Union but a fight for human freedom. The Emancipation Proclamation virtually ended any thought of intervention by England or France on the side of the Confederacy. This was because of the support of the common man in Europe for the end of slavery in America. The Rohrbach bridge would forever be known from that point on as the Burnside Bridge.