- April 08, 2014
There are several stories about the origins of the term "the real McCoy". It simply means that if you or an object are the real McCoy, there is nothing phony or fake about you or it. You are the real deal. One story claims that the term originated with a distiller named McCoy during prohibition who made good quality liquor. His booze was the real McCoy. Another story gives the credit to Charles "Kid" McCoy. McCoy was born on October 13, 1872. He got his nickname "Kid" because he started prize fighting as a teenager. McCoy fought for 25 years and was married 9 times. He is considered by many experts to be the greatest light heavyweight fighter that ever lived. McCoy developed the "corkscrew" punch. It was famous for the cutting damage that it did to the other fighters faces. He was known for trickery and unpredictability in the ring. McCoy would do things like fake illness before a fight and put out the word to the press that he would not be up to par. Sometimes he would claim that he had not properly trained for the coming fight. When he got in the ring he would fight like his old self and defeat his opponent.

Reporters would ask him after the fight if this was the "real McCoy"? He would tell the story about the night that he was in a bar having a drink with a lady friend. A man accosted the lady and McCoy told him to leave her alone. He continued bothering her and McCoy warned him again saying "I'm "Kid" McCoy. The man replied "yeah, and I'm George Washington". McCoy knocked the man out with one punch. After about ten minutes the man came to his senses, rubbed his eyes and said "Jeez, it was the real McCoy". Upon retirement from boxing he tried acting for awhile but this didn't work out. He began having an affair with a wealthy antique dealer named Theresa Mor who was married. She fell in love with McCoy and filed for divorce from her husband. Mor was found shot to death in the apartment that she shared with McCoy. McCoy claimed that her death was an accident but he was convicted of manslaughter and served ten years in San Quentin prison. He was a model prisoner and once while working on a road gang he saved the life of a pilot who crashed nearby. As a result he became good friends with the warden. He was released in 1932 and went to work for the Ford Motor Company but on April 18, 1940 he was found dead after taking an overdose of sleeping pills just before he was to be married for the tenth time. 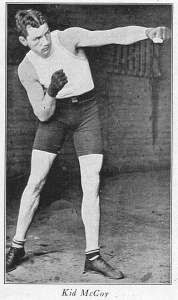 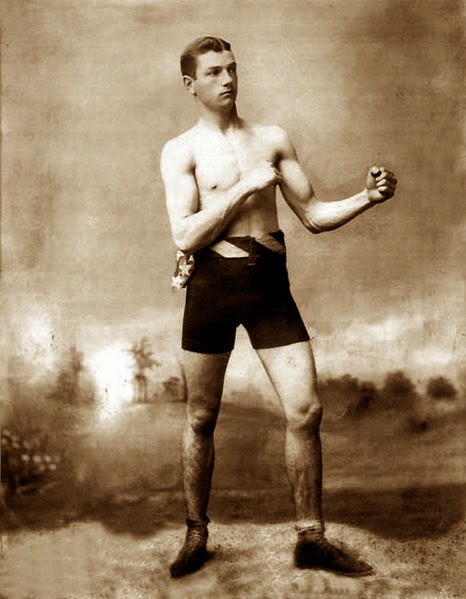