PATTON'S PRAYER - OKAY GOD, WHOSE SIDE ARE YOU ON?


General George S. Patton is the only American or British general that wasn't surprised by the massive German armored and infantry attack through the Belgian Ardennes forest on December 16, 1944, which came to be called the Battle of the Bulge. The Germans consider Patton to be the best General in the Allied Army and for that reason the spearhead of their their attack avoided the sector that Patton's forces protected. Patton's Third Army has been ordered to save the American's trapped in Bastogne, which are comprised primarily of the elite 101st Airborne Division. The 101st Airborne numbers about 11,000 troops and they are surrounded by 60,000 German troops. They entered Bastogne on December 20th. Patton promised General Anthony McAuliffe, the commander of the 101st, that he would reach Bastogne by Christmas day but due to the terrible winter weather it doesn't look like he is going to make it by then. So, he stops at a Catholic cathedral named the Fondation Pescatore in Luxembourg City, thirty-three miles from Bastogne to pray. Patton has a habit of praying but is one of the most profane generals in the American army and he regularly reads the Bible. He is an Episcopalian who believes in reincarnation. The following is Patton's prayer on December 23, 1944.

Sir, this is Patton speaking. The last fourteen days have been straight from hell. Rain, snow, more rain, more snow – and I’m beginning to wonder what’s going on in Your headquarters. Whose side are You on, anyway?

For three years my chaplains have been explaining that this is a religious war. This, they tell me, is the Crusades all over again, except that we’re riding tanks instead of chargers. They insist we are here to annihilate the German Army and the godless Hitler so that religious freedom may return to Europe. Up until now I’ve gone along with them, too. You have given us Your unreserved cooperation. Clear skies and a calm sea in Africa made the landings highly successful and helped us to eliminate Rommel. Sicily was comparatively easy and You supplied excellent weather tor our armored dash across France, the greatest military victory that You have thus far allowed me.

You have led German units into traps that made their elimination fairly simple. But now, You’ve changed horses in midstream. You seem to have given von Rundstedt every break in the book and frankly he’s been beating hell out of us. My army is neither trained nor equipped for winter warfare. An as You know this weather is more suitable for Eskimos than for southern cavalrymen.

But now, Sir. I can’t help but feel that I have offended You in some way. That suddenly You have lost all sympathy with our cause. That You are throwing in with von Rundstedt and his paperhanging-god. You know without me telling You that our situation is desperate. Sure, I can tell my staff that everything is going according to plan, but there’s no use telling You that the 101 st Airborne is holding out against tremendous odds in Bastogne, and that this continual storm is making it impossible to supply them even from the air.

I’ve sent Hugh Gaffey, one of my ablest generals, with his 4th Armored Division, north toward that all-important road center to relieve the encircled garrison and he’s finding Your weather much more difficult than he is the Krauts. I don’t like to complain unreasonably, but my soldiers from the Meuse to Echternach are suffering the tortures of the damned. Today I visited several hospitals, all full of frostbite cases and the wounded are dying in the fields because they cannot be brought back for medical care.

But this isn’t the worst of the situation. Lack of visibility, continued rains have completely grounded my air force. My technique of battle calls for close-in-fighter support, and if my planes can’t fly, how can I use them as aerial artillery? Not only is this a deplorable situation, but, worse yet, my reconnaissance planes haven’t been in the air for fourteen days, and I haven’t the faintest idea of what’s going on behind German lines.

Damn it Sir, I can’t fight a shadow. Without Your cooperation from a weather standpoint I am deprived of an accurate disposition of the German armies and how in hell can I be intelligent in my attack? All this probably sounds unreasonable to You, but I have lost all patience with Your chaplains who insist that this is a typical Ardennes winter, and that I must have faith.

Faith and patience be damned! You have just got to make up Your mind whose side You’re on. You must come to my assistance, so that I may dispatch the entire German Army as a birthday present to Your Prince of Peace.

Sir, I have never been an unreasonable man; I am not going to ask You for the impossible. I do not even insist on a miracle, for all I request is four days of clear weather.

Give me four clear days so that my planes can fly, so that my fighter-bombers can bomb and strafe, so that my reconnaissance may pick out targets for my magnificent artillery. Give me four days of sunshine to dry this blasted mud, so that my tanks may roll, so that ammunition and rations may be taken to my hungry, ill-equipped infantry. I need these four days to send von Rundstedt and his godless army to their Valhalla. I am sick of this unnecessary butchery of American youth, and in exchange for four days of fighting weather, I will deliver You enough Krauts to keep your bookkeepers months behind in their work. Amen”

The weather cleared later that day. Forward elements of Patton's army fought it's way heroically into Bastogne on December 26th under the command of Creighton Abrams. The siege was lifted the next day on December 27, 1944. That morning Patton walked into a small Catholic chapel and dropped to his knees and began to pray. "Sir, this is Patton again and I beg to report complete progress. Sir, it seems to me that You have been much better informed about the situation than I was, because it was that awful weather which I cursed You so much which made it possible for the German army to commit suicide. That, Sir, was a brilliant military move, and I bow humbly to Your supreme genius". 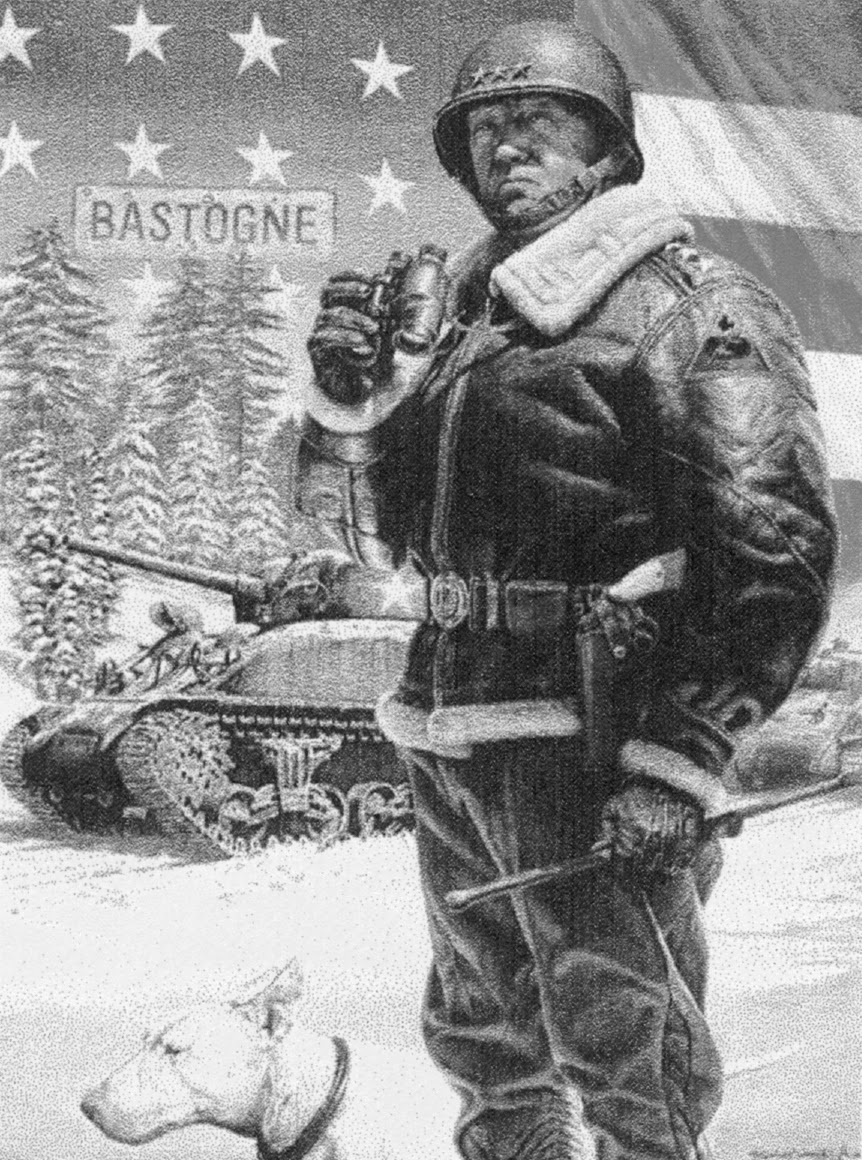