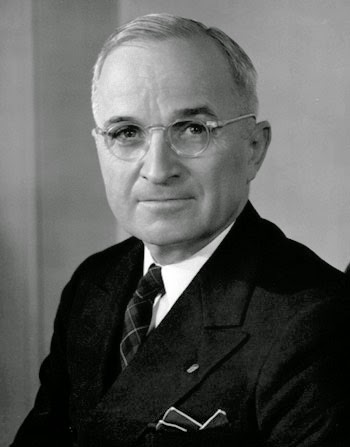 Anyone that knows anything about me has figured out by now that I am not very fond of the modern day Democratic Party. In my opinion the last fairly decent Democratic president was John F. Kennedy. However one of my favorite presidents, who happened to be a Democrat, was Harry S. Truman. I would put Truman on my ten greatest presidents list. Truman was a man straight from the ranks of the common people. He was a Southerner who only a high school education. Unlike so many presidents and presidential candidates today he experienced true struggle in his life. He had been a farmer, bank teller, railroad worker, who slept in hobo camps along the tracks. Was a artillery captain who experienced combat in World War I and later opened a haberdashery with a close personal Jewish friend, and fellow veteran, that eventually went bankrupt. Although he didn't have to, he spent years paying back his creditors. Truman was honest as the day was long. He maintained that honesty even as a judge in one of the most corrupt political machines in the country. The Tom Pendergast machine in Missouri. In my view Truman had his flaws however. He was a New Dealer, supported national health care insurance, and made flawed decisions in handling the Korean war. However he led the country successfully through the last months of World War II after the death of Franklin Roosevelt in April 1945. He had the courage to drop the atomic bombs on Japan which contributed to the end of the war.

Truman stood up to the North Korean communists when they invaded South Korea in June 1950. He courageously fired Douglas MacArthur for insubordination knowing that he would be crucified by the press and the public. Signed an executive order integrating the armed forces. Demanded a Civil Rights plank in the 1948 Democratic Party platform. This action caused a rebellion led by Democratic South Carolina Senator Strom Thurmond who formed the Dixiecrat Party. Was the first president to address the N.A.A.C.P. and publicly deplored the torture and murders of returning black war veterans to the South. All of this from a Southerner who regularly used racial slurs and had once tried to join the KKK in order to enhance his political career. Truman began the policy of containment which would one day contribute to the collapse of the Soviet Union which was finalized by Ronald Reagan. He initiated the Marshall Plan which would rebuild war torn Europe, saving many lives and helping Europe stand up to the Soviet Union. Developed the hydrogen bomb over the objections of liberal scientists and the liberal press. Unlike the modern day charlatans such as the Clinton's and Obama Truman had great character. No one respected the office of president, and the Constitution, more than he did. I can only imagine what Harry would say about the modern day Democrat and Republican Party if he could see them in action. On a campaign swing in 1948 one supporter shouted " Give em hell Harry" He shouted back " I don't give em hell. I just tell the truth and they think it's hell". How I would love to see Truman give these modern politicians hell today. They wouldn't recognize the truth if it smacked them in the face.

America acquired Puerto Rico as a territory during the Spanish American War, along with Cuba and the Philippines. The Nationalist Party of Puerto Rico wanted complete independence from America but it had little political power in the 1940's. The popular Democratic Party of Puerto Rico was the strongest party and it was in negotiations with the U.S. to create a new political status for the island. On October 30, 1950 the Nationalist Party began a series of revolts. These revolts were put down by military force which included the use of airplanes. Nationalists Greselio Torresola and Oscar Collazo made plans to assassinate Truman. He had said that the revolts were a fight between the Puerto Rican people or if you willan internal affair. Torresola and Collazo intended to kill Truman in order to drive home the point that it was a war between two countries and not an internal problem as Truman claimed. The White House was going through a total renovation. It had been discovered that the structure was on the verge of collapse and engineers decided to gut the building of everything except the original walls and totally rebuild the interior. Temporarily Truman and his family were living at the Blair House across the street from the White House. Francis Preston Blair, publisher of a pro Andrew Jackson newspaper, founder of a powerful political family, and a personal friend of Jackson was the second owner of the house. For many years now it has been used as a guest house for visiting foreign dignitaries. The following is from the Truman Library website.

On the morning of November 1, they prepared for the assault. Torresola, a skilled gunman, taught Collazo how to load and handle a gun. They familiarized themselves with the area near Blair House, across the street from the White House, where they would stage the assault. (The Truman family stayed in the Blair House during renovation of the White House from 1948 to 1952). Collazo and Torresola planned to approach the house from opposite directions and shoot their way inside. In the ensuing gun battle, Collazo and Torresola traded gunfire with White House policemen and secret service agents. They wounded three White House policemen but never reached the interior of the house. One of the wounded policemen, Private Leslie Coffelt, managed to fire one bullet and hit Torresola in the side of the head, killing him instantly. Coffelt died later that day at the hospital. Two other policemen, Donald Birdzell and Joseph Downs, were each hit more than once but recovered from their wounds. Collazo reached the steps of Blair House before collapsing with a gunshot wound to the chest. It was later found that only one shot fired by Collazo had hit anyone, his first shot, which wounded Private Birdzell. Torresola had inflicted all the other gunshot wounds on the three White House policemen. President Truman was taking a nap upstairs in Blair House when the shooting began. He rushed to a window and saw Collazo below on the front steps. A White House guard saw the President in the window and shouted to him to him to get down. The President obeyed. Collazo was sentenced to death for the attempt; one week before his scheduled execution in 1952, Truman commuted the sentence to life imprisonment. President Carter commuted the life sentence of Collazo in September 1979, and he was freed from prison. He died in Puerto Rico on February 20, 1994 at the age of 80.

Over the years Puerto Rico has consistently voted to remain a territorial possession of the United States. Their citizens have had the option of voting for independence and they have rejected that option in many national referendums time after time. They enjoy all the rights and privileges of American citizens granted by the Jones Act of 1917. 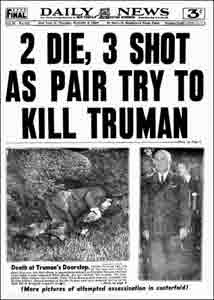 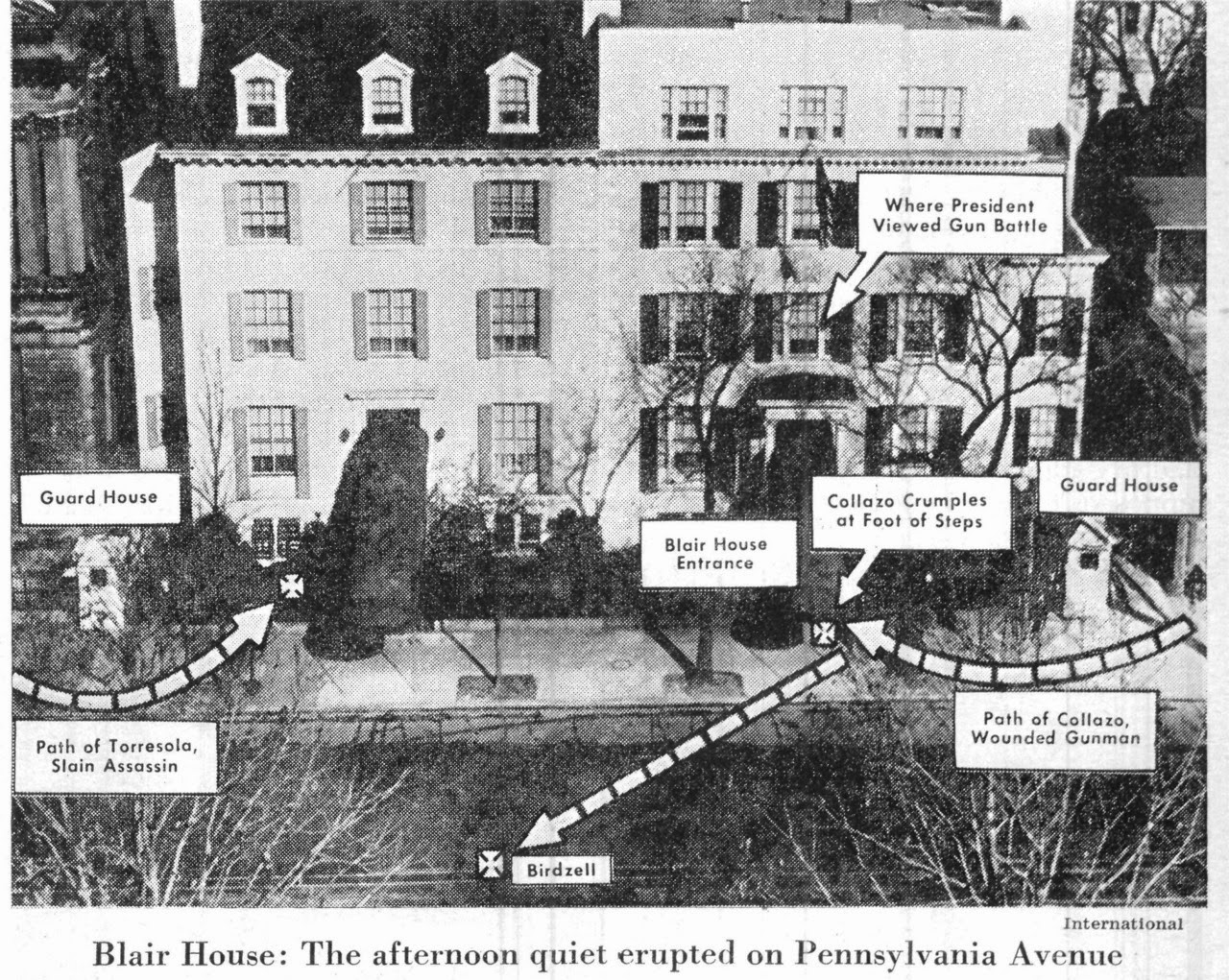